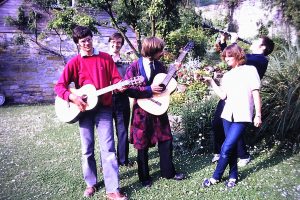 The band debuted at the Bridgwater Arts Centre doing classic numbers including Hoagy Carmichaels ‘Hong Kong Blues’-it was during a rehearsal of this number in the dressing room that bluesman Georgie Fame walked in on them and re-discovered Hoagy-inspiring him to bring out an album and meet the veteran composer.

During the 80’s Club Whoopee played informally and infrequently-parties, restaurants, small theatres, the Brighton all-night horror film festival. However, it was in 1981, with the demise of the Dangerous Brothers that Smedley decided to devote more time to Club Whoopee and the band was revamped to include members of the cast of Sheep Worrying theatre group and to perform songs from the Sheep Worrying shows written by himself and Kim Newman.

By 1982 the band were gigging and recording. A tape album ‘Sheep Worrying at the Club Whoopee’ featured such hits as ‘Brazil’ , ‘Over the Top and ‘Throw yourself off a Bridge’ while that same year they contributed ‘You’re sort of Okay’ to the Sheep Worrying EP (which also featured The Headless Horsemen-fronted by John Parish who now plays with PJ Harvey).

The band brought in former DB’s Neal Heckford (piano) and Kevin Freeman (drums) but the line up changed constantly and also included Liz Hickling-who later became a film actress and Rob Hackwill-now a journalist with Euronews..

In 1983 a short lived rapprochement between Smedlo and former DB’s frontman Rod Jones resulted in an revived Club Whoopee but disagreements led to the band fading out in favour of other projects. However, in 1983 the band took 2 trips to the studio and recorded ‘Working in an office’ and ‘Me and my clone’ featuring Rod Jones, Lynne Cramer & Alan Gadd and later  ‘Rock n roll Lizard’. & Brazil  featuring Newman, Byrne and Hackwill

Kim Newman went on to be a successful film critic and horror writer and along with Byrne & Dunn collaborated with Smedley again in 1987 to produce the Sheep Worrying musical ‘Rock,Rock,Rock,Rock,Rock,Rock,Rock’. Which included such Newman/Smedley classics as ‘I’m too fat to Rock’, ‘I Hope you Die’ and ‘He’s a bastard but I love him’.

In April 2000 the band reformed for a one off recording session at the Bridgwater Arts Centre-as a surprise for Newman on his ‘birthday’. Backing recorded by Smedley (guitar/piano/bass), Dean Skilton (drums) and vocals by guest artistes Elaine Di Campo (The Funbunnies) Alexia Vernon (Visitors/Thermo Lovelies) were added to by Newman, Byrne and Dunn karaoke style. The resulting album ROUTE 666 (named after a Newman novel) is now available (if anyone wants a copy) (only true devotees please) and features such classics as Byrne singing ‘Blue Moon’ in the style of Val Doonican, Dunn fronting ‘Buddy can you spare a dime’, Smedley unconvincingly putting across ‘I’m too fat to Rock’ and Newman taking the lead on ‘Route 66’ ‘Love Potion no 9’ ‘Rawhide’-daringly ‘Aqua Marina’ plus some originals ‘Hes a bastard but I love him’ ‘Ponytail Pervert’ and ‘I’m bustin out for xmas’.

That was (probably) the final gig…….